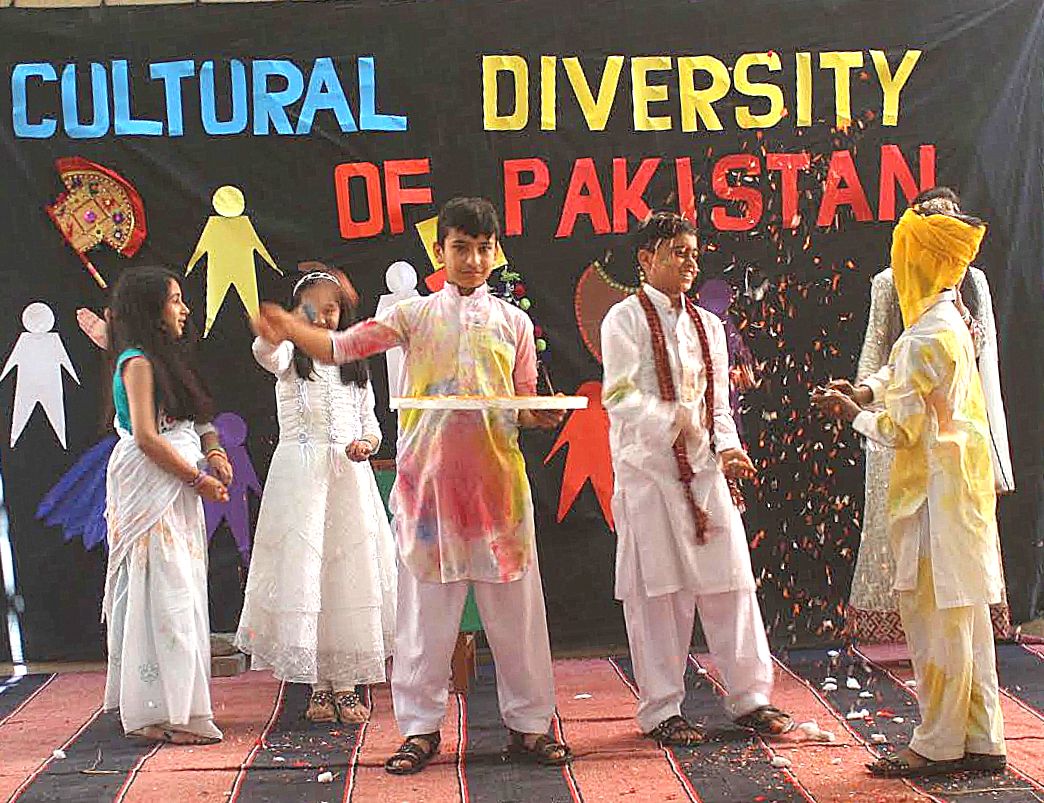 Sajida Nasreen, assistant secretary general of the Pakistan National Commission for Unesco, and Munir Ahmed, director DEVCOM were the guests of honour for the event.

On their arrival, the parents and guests were given a special welcome by a group of singers and performers who sang a welcome message in several different languages of Pakistan. Thus began the dazzling showcasing of cultural diversity in the country.

As students dressed in traditional attire of the different regions of the country pretended to walk into a local ‘dhaba’ to order the region’s culinary specialties in their local language, ‘waiters’ brought out saplings of the food and drinks to the audience. Region after region had delectable items to view and taste and the audience just could not hide their surprise and pleasure of the freshly made regional foods and drinks.

After the culinary feast, a second group of traditionally attired performers came to harvest different regional crops. They performed their beautiful and distinctive traditional dances much to the delight of the audience. Street games were played in front of the audience, no doubt taking many parents back to their childhoods.

As a student dressed as a Christmas tree made his way on the stage, so started the showcasing of some of the major festivals celebrated in Pakistan. Eid, Christmas, ‘Nowruz,’ ‘Basant’ and ‘Holi’ were celebrated so realistically that one almost felt like it was that time of the year.

The last performance of the day was a very funny tableau that had everybody in fits of laughter but it also sent a strong message of embracing our differences as a nation. As two men who didn’t speak each other’s regional languages fought over the same thing, a bystander enjoyed it thoroughly. When he finally decided to pacify them, he told them there was beauty in understanding each other’s mother tongue. Students dressed as colourful trucks with poetry of different regions came in front and every poem’s stanza was a hilarious surprise when translated by the bystander.

The audience gave a long round of applause to all the performers. Section Head Adeela Rehman gave a note of thanks to all the guests for coming and stressed the need for tolerance and acceptance in society. Sajida Nasreen congratulated the students and teachers on putting together such an entertaining and informative event and appreciated the time and effort it took.