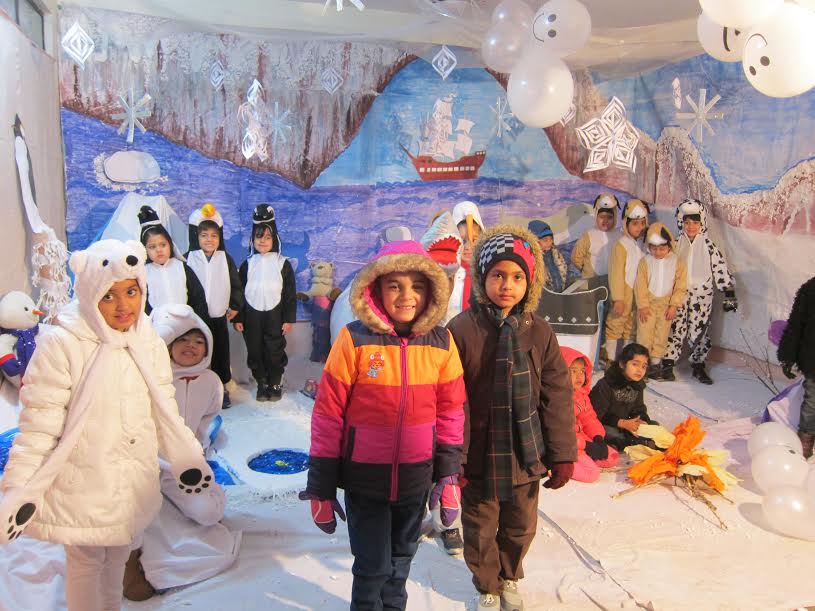 Over 3,000 parents and guests attended the grand exhibition, which was followed by a funfair for all.

Parents and guests started their tour with the Junior Montessori ‘Garden’ themed classes. Each classroom represented a magical thing found in a walk through a garden. One class had students as different ‘Birds’ with perfect little costumes and chirps. Another had students as beautiful ‘Flowers’ dancing in the breeze.

Some students were scrumptious fruits, telling guests just how delicious and healthy they were, and ‘Vegetables’ were not ignored with Ms. Potato and Mr. Pumpkin amongst many other vegetables singing poems about themselves. Student ‘Insects’ buzzed around, gorgeous caterpillars, bees, lady bugs and determined ants singing their roles.

The senior Montessori classes took the parents and guests on a journey into Spain, China, Egypt, Saudi Arabia and the wild life side of Australia. Stepping into each classroom was like stepping into a fun film set for that country. Students wearing different traditional attires of each country greeted guests in the local language. They performed the country’s traditional dances and the parents were particularly delighted by the traditional Chinese Dragon Dance and Middle Eastern tambourine dancers.

Students dressed in traditional Chinese qipao dresses showed guests the art of hospitality in making and serving tea with the backdrop of an almost perfect miniature replica of The Great Wall of China. Ancient Egypt showed the times of the Pharaohs and the process of mummification. In Australia, parents couldn’t stop cooing to the student kangaroo and the koala bear stayed on his tree, true to his nature.

Last but not the least, the students of Advance Montessori classes showed parents life in the dessert, up in the mountains, in the icy regions of the North Pole, in the throngs of a rain forest and deep in the sea. The classrooms were converted into Land Forms fantastically. Introducing themselves as inhabitants of the particular land form, students showed parents A Day In The Life Of with their costumes, their food resources and the upside to their particular land form. Life Under the Sea was a particular favourite with a huge jellyfish that had tentacles encompassing a student and students as sea horses, whales and sharks. Each life form had a song to tell you about its beauty and its wonder. Even those that are microscopic and not visible to the naked eye were costumed up and made visible for the guests.

The day ended late in the afternoon with a Funfair for all families and guests with different food stalls, a magic show, a maze, and a haunted house with a very ‘witchy’ teacher as the ticketer, much to the delight of all the students.