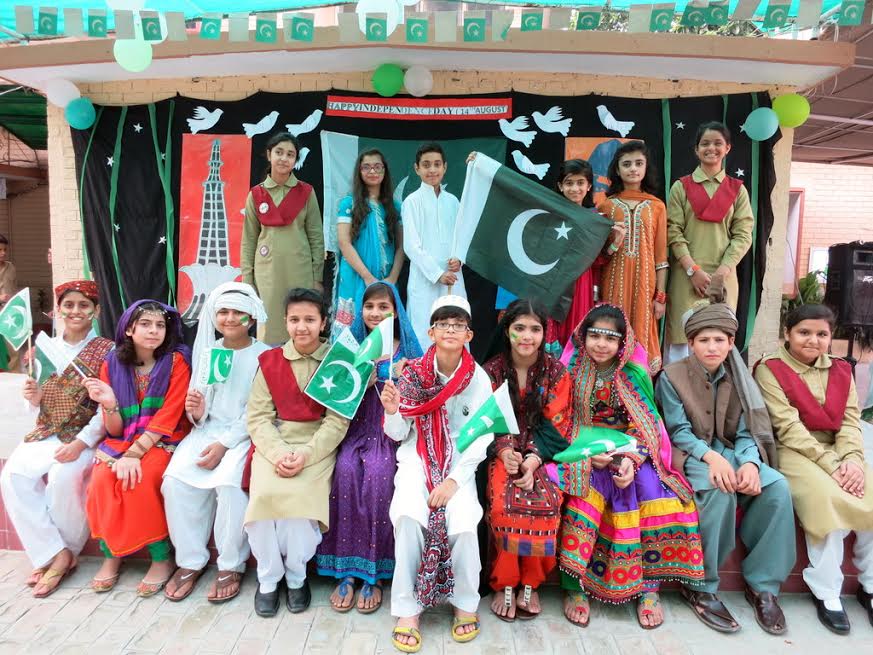 August is marked by green and white everywhere — in waving flags, in face paintings, hats being sold at traffic lights, ready-made clothes and of course, tall structures adorned by lights. Six of the main road campuses of SLS School were lit up from top to bottom in green and white lights and were a sight to see for students, parents and of course, all of the neighbouring community.

Students returning after their long summer break spent time on their first day to make flags to pin to their shirts and forehead bands with patriotic messages. Corridors and hallways of the schools were decorated with Pakistani flags and buntings of green and white color upped everyone’s patriotic sentiments. National songs were played and sung joyously by students and teachers alike in their morning assemblies. Some campuses arranged cultural walks showcasing the different provinces with the very appropriate “Is parcham ke saey talay hum aikhain” (We are one under this flag) being sung. Of course, Mohammad Ali Jinnah, Fatima Jinnah and Allama Iqbal made an appearance because without them any Independence Day celebration would not be complete!

Director of SLS Schools Asiya Talha said on the occasion that SLS School took its duty as a molder and shaper of students’ characters very seriously. She said that while patriotism is one of the best things to instill in a child, the most important thing to instill is the realisation that we are all humans living, breathing and feeling the same feelings all over the world and that borders and restrictions are all human-made. Students must think of themselves as citizens of the world instead of just their country, she said.