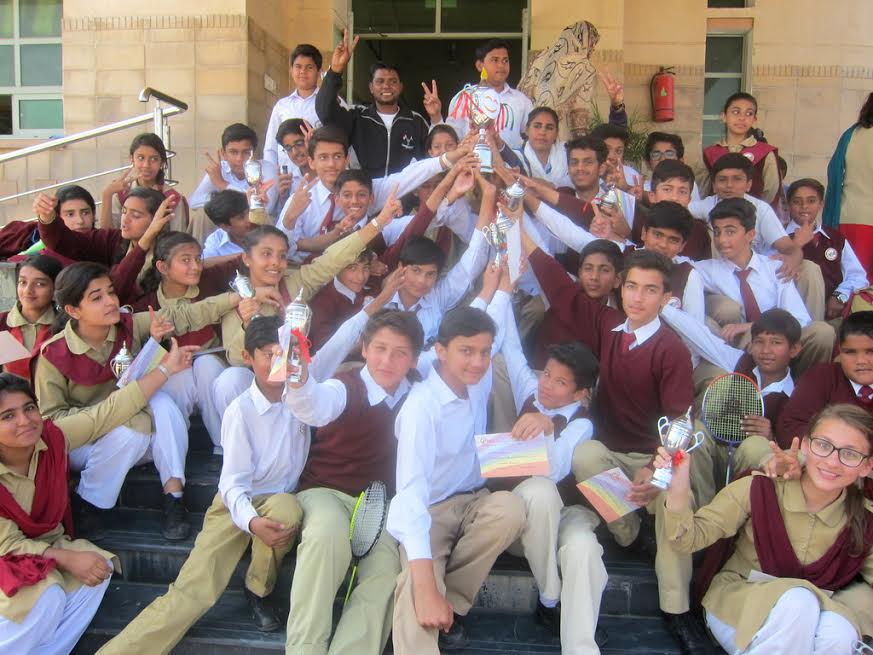 Imtiaz Gill, secretary general of Pakistan Badminton Federation was the guest of honour to witness the exciting final matches and award trophies to the winners. A total of 140 students of classes V to IX from 15 branches competed in singles and doubles matches for girls and boys.

Playing first in the eliminating heats and then moving up through the quarter final, semi-final and ultimately the final rounds, all participants showed their competitive streak and every point was well played and earned the applause and admiration of all the spectators. There was a lot of applauding and hurrahs as the students of the different campuses cheered on their playing team mates.

The Islamabad campus and Lalazar campus dominated the proceedings, and Satellite Town put up a good fight as well. The players qualified through the eliminating matches to reach the Finals in different categories in the Singles and Doubles. Mr. Gill who himself represented Pakistan internationally and played professionally for 15 years was full of praise for the standard of matches he witnessed.

Basing it on the maximum number of matches won, the Islamabad campus walked away with the championship trophy with 54 points, breaking Lalazar campus’s 11-year winning streak. The Lalazar campus came second with 41 points. Rafay Kiyani, grade 9 and Sajal Fatima, grade 7 of the Islamabad campus won the best players of the Tournament trophy (singles), Huzaifa Abbas and Hayan Khan, grade 9 of the Lalazar campus were awarded the Best Doubles Team of the Tournament trophy (boys), and Noor-e-Fatima and Fareeha Hasan, grade 9 of the Tufail Road campus won the Best Doubles Team trophy (girls). The coach who was awarded the certificate for the Best Disciplined Team was Riffat Iqbal of the Satellite Town campus.