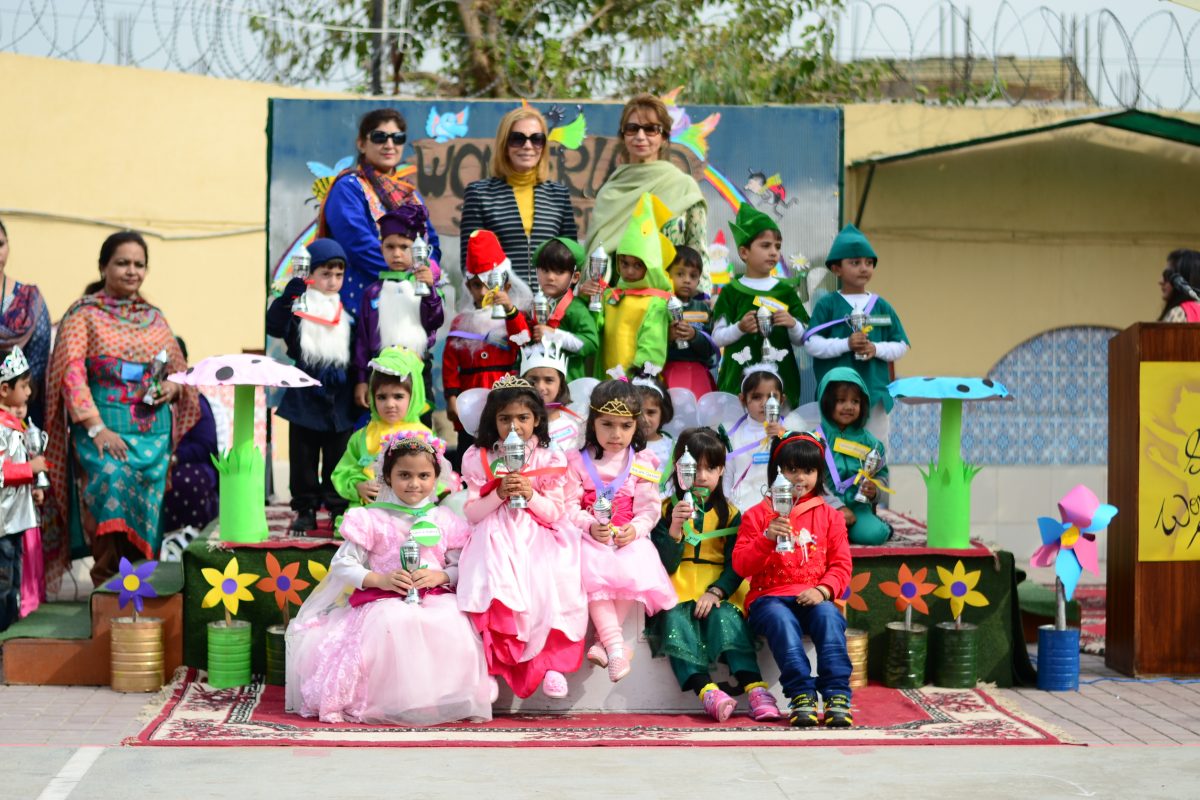 Fairy tales are part of a child’s learning experience from the time it begins to read and recognise images and they not only entertain but are responsible for flights of imagination that let a child enjoy the wonderland of mythical creatures like fairies and witches.

Keeping this in mind, the SLS Montessori and High School in Islamabad organised a Sports Day with the title, ‘Wonderland Sports Day,’ in which children of the various Montessori sections took part dressed in costumes assigned to each section. The event was attended by proud parents and siblings and the guest of honour was Susana Martin-Saravia, wife of dean of the Diplomatic Corps, Ambassador of Argentina, Rodolfo Martin-Saravia – apart from which she is a popular personality of the capital in her own right.

The playground had the young students – dressed in their colourful costumes – sitting on one side and the parents at the opposite end, with a stage in the middle. Balloons and bunting and colourful decorations gave the place a cheerful look while lively music played in the background. The programme began with Director of SLS Schools, Asiya Talha introducing the guest of honour and saying a few words about her, including the fact that she and her husband have been here over a decade and are instrumental in making Argentina known better to Pakistanis, while her husband has received the highest civilian award from Pakistan for his contribution in improving bilateral relations between Pakistan and Argentina.

After recitation from the Holy Quran, the games were declared open by the guest of honour with the cutting of a ribbon, and the programme began with a march-past by all the children – fairies and princes; bumble bees and mermaids; unicorns and witches and many other fairy tale characters, with the little ones walking in a surprising orderly fashion, waving to the parents and those on the stage with confidence and cheerful smiles. After this there were different kinds of races and these were interspersed with a lively cheer-leaders performance and a PT display. Of-course there were a few instances of little ones straying away and walking and running in the opposite direction but these added to the enjoyment of the event instead of detracting from it. Who can resist children when they look so cute, happy and unaware about their actions!

Anyway, despite the fact that the children were from three to six years old, everything went with clockwork precision, with no delays, credit for which goes to their teachers and the overall in-charge – Uzma Ali. It requires patience and a love for children to achieve results of the kind on display at this event – the guest of honour was rightly impressed and had words of praise both for the children and their teachers. “I have a four year old grandson and I know what it is like to handle them,” she said with a warm smile. “I give them full marks!”

Prizes were awarded to the first three position holders in each group, while a special consolation prize was given to a little girl who kept going to complete her walk, completely unaware that she was alone trailing behind the others long after they had reached their goal. Now that’s sportsmanship, even at that tender age! In conclusion the principal Shahida Khurshid and Uzma Ali were presented tokens of appreciation by the school administration; the director thanked the guest of honour for taking time out from her busy schedule to attend the event and refreshments were served to the parents and children and the successful event concluded on a happy note.