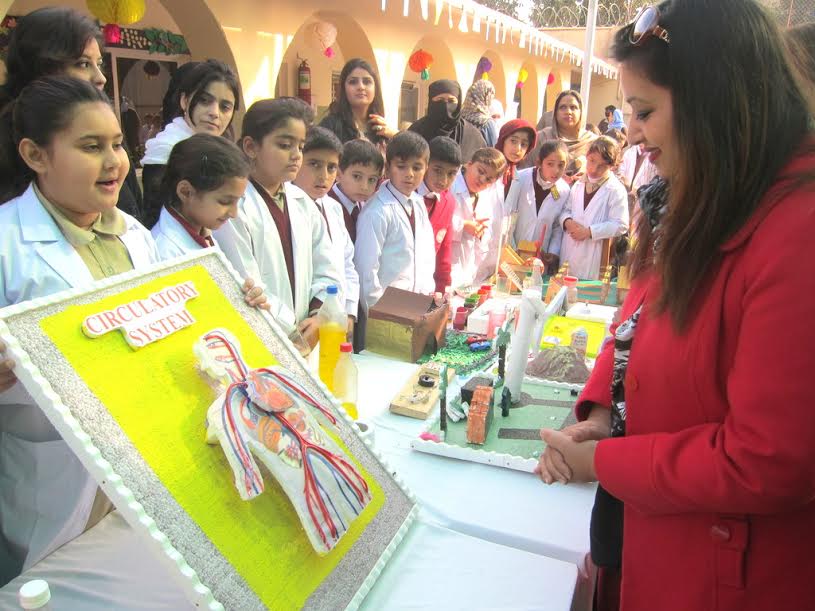 The students of SLS Primary Branch, Satellite Town, showcased their ‘Little Scientist Week’ projects on a sunny day in the branch’s school ground with a dozen tables with carefully crafted science experiments awaiting the parents and guests. Students of grades 1 to 3 all dressed up in their white lab coats were waiting to impress their spectators. The chief guest for the event was Tasneem Yousuf Lotia, headmistress of Frobels International School, Civil Lines campus. Her welcome committee was a girl and a boy dressed up as a little Einstein and a little Newton.

Lotia went from table to table asking about each project from every student. While some students were delighted to talk about their project and went in depth into its workings, others were a little tongue-tied and shy at first. However every student’s effort was appreciated. They were asked who helped them on their project and the proud parent or teacher was then clapped for as well. This resulted in a few hours of pure science and lots of teamwork appreciation.

Students had spent a few weeks discussing and deciding on their projects with their teachers and then involving their parents in it. Head Teacher of SLS Satellite Town primary branch, Umema Tuz Zehra encouraged the maximum use of recycles to make the projects, therefore a lot of items like tin cans, ice cream sticks and plastic bottles were seen in the projects. Students had also brought their own action figures to incorporate the ‘human life’ element in their projects.

The erupting volcano using baking soda and vinegar was the most popular project amongst the students followed by simple circuits where potatoes and lemons were used to generate enough energy to light up one small bulb. The working of a parachute was demonstrated by a young girl using a cartoon figure as a human. When thrown from a height into the air, the parachute came down slowly as it pushed against the air.

Many other simple science projects delighted the parents and guests. Head teacher Umema Tuz Zehra thanked the guest of honour and all the parents and teachers for making the science exhibition a memorable fun-filled day.