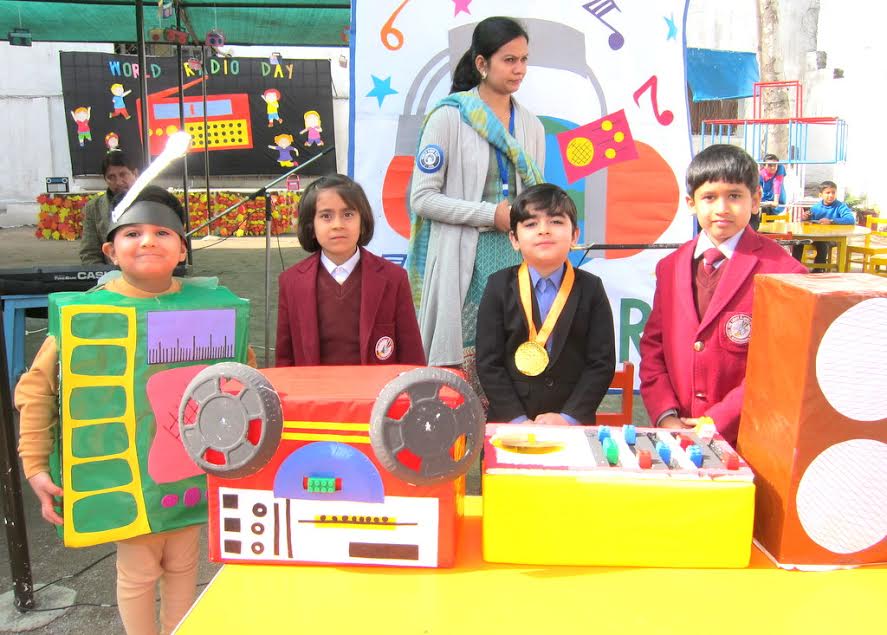 Students of Junior to Advance Montessori and Class 1 invited their parents and other guests to come and understand why World Radio Day was declared by Unesco to be celebrated on February 13 every year.

The programme started with an introductory presentation on what a radio is, how it works and why it is such an important part of our lives. Guests then got to meet the ‘inventor’ of the radio, Guglielmo Marconi who was wearing his Nobel-prize medal and through a poem that he sang, he relayed his thoughts that led to his discovery and what a fine discovery it was! He demonstrated the different usages of the radio on a student who was dressed up as a radio set.Every time the student ‘radio set’ needed tuning, it brought about many smiles and giggles.

Following the inventor’s act was a student playing the part of radio broadcaster and jockey who was ‘live on air’ and he demonstrated the fun side of radio usage to parents and guests talking very smoothly and taking out basic beat box sounds.

A dance performance by a group of students dressed up as radio sets followed and it was a delightful robot break dance to a robotic soundtrack. A skit with a grandmother and two granddaughters demonstrated the usage of radio in today’s times as they listened to a story on the radio and their grandmother told them how even with all the other newer technologies, the radio was still one of the most important discoveries and would remain so.

This year’s theme for World Radio Day was Radio Saves Lives. This theme was explained by students who presented themselves as a mountaineer and a scout who having lost their way, on a mountain and in forest respectively, were later rescued through the help of radio waves and signals.

All students participated in some sort of activity to commemorate the day at the campus. Parents got to see these activities displayed at the activity corner. Students of Junior, Senior and Advance Montessori coloured pictures of different radio sets, drew pictures and did collage work. Class 1 students did creative writing on ‘Radio’ and drew pictures.

A fun radio set photo booth made for memorable family photos. Section Head, Saira Noor thanked all the parents and guests for coming. She appreciated the work done by the students and the hard work put in by her teaching staff.