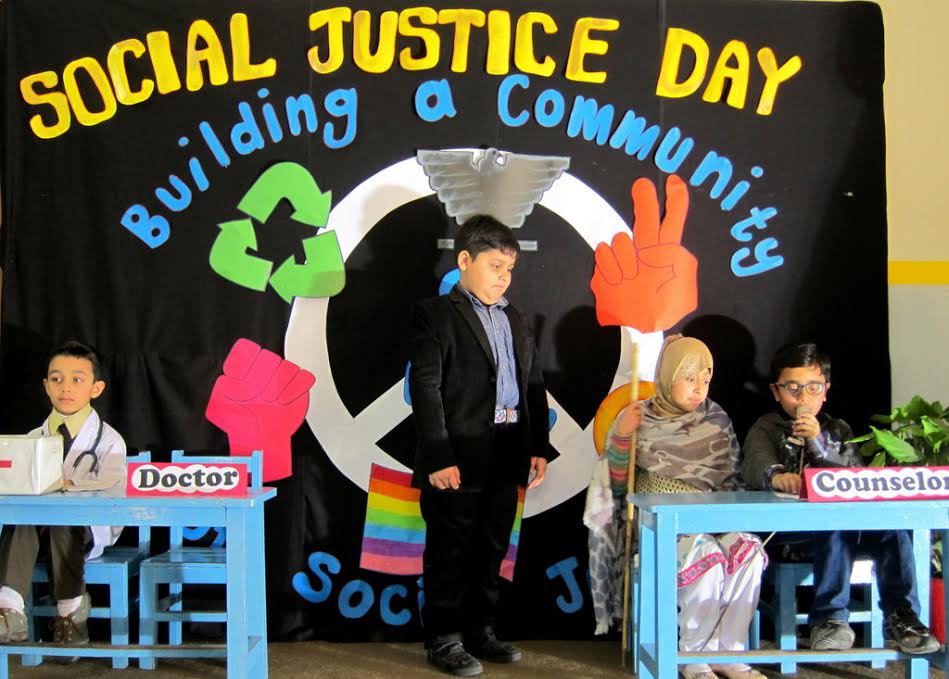 Students of junior, senior and advanced Montessori and class 1 prepared skits with the help of their teachers to perform in front of their parents and other guests.

A topic like social justice is a difficult concept to explain to young children yet through short play performances, the young students of Montessori and Class 1 showed that they had grasped the concept quite beautifully. The event began with the message of ‘Let’s seek justice, love mercy and walk humbly’. The first performance was on the treatment of children with disabilities. As students are discussing what is supposed to be an exciting Sports Day event at their school, a disabled child gets picked on because he won’t be able to participate in the races. The teacher quietens the laughing class and proceeds to tell them what winning in life is truly about.

The second performance was on the right to food, clothes and shelter for all. An old hungry woman sitting on the roadside in cold weather is noticed by a father and daughter. The daughter chooses to share her lunch with the woman. On finding out that she’s ill and without money, the father takes the woman to a doctor, paying for the fees and medicine, setting a fine example for his little girl. Students were shown that human interaction and giving food and helping with medicine is a better option than supporting beggary as a profession.

The next performance showcased education for all. A household where only the education of the boys is considered worth anything has the girl asking why she isn’t considered an equal when it comes to literacy and knowledge. Two school going boys talk about their feelings on seeing child labourers their age earning income for their households. They tell the working boys about their low fee structured school and encourage them to talk to their parents about the possibility of an education.

The play performances were wrapped up with a delightful song about children and their rights. Students sung that they had a right to be loved, a right to a home, the right to sing, the right to play, and if the world gave them these rights, they could make this world a better place when they grew up.

Parents of the students of SLS were very moved and impressed with their young children touching upon such important and difficult issues in society. Section Head, Humaira Zaidi congratulated her students and teachers on a well celebrated day.