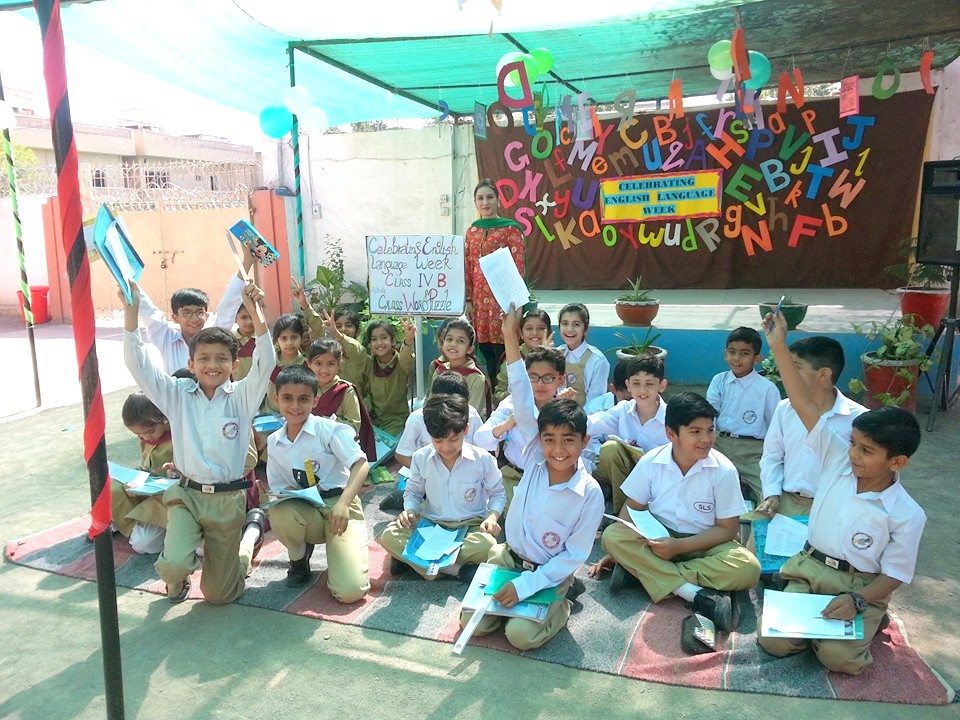 The Language Week celebrated at SLS, Peshawar Road Primary branch had a lot of exciting English language activities planned throughout the week.

Shakespeare and the grandeur of his literary works was the focus of the morning assemblies. Students performed on parts of different plays written by William Shakespeare. It was a treat to see young children dress up like characters of Macbeth, Hamlet and Merchant of Venice and speak Shakespearean dialogues while performing their parts. Students were introduced to famous quotes of Shakespeare throughout the week and were motivated to “learn a phrase a day”.

A poetry writing competition was held and the best poems were displayed for parents and visitors to view and read.”Make your own Story Book” had students making their very own story books following a given outline. The activity was carried out in groups and students loved creating their own stories and adding colorful illustrations and cover pages. ‘Grammar Balloons’ challenge was to keep the balloon in the air while uttering as many vocabulary words as possible from the chosen lexical group at every hit. Other groups listened carefully and shouted “out!” for every mistake or repetition. Another fun filled activity called “Readers’ Theaters” gave students 15 minutes to prepare given roles and dialogues after which they had to present on stage. Students prepared crossword puzzles from their favourite stories and then challenged their friends to solve them.

‘Running Dictation’ was a thrilling game played by students in which interesting paragraphs were pinned up at a distance and students had to run, memorize sentences and spellings, and dictate it to their partners. Chants were made by students and used to memorize difficult concepts. A ‘Mystery Story’ was created by students by passing on the script to others after adding a secret sentence and students laughed their hearts out when they tried to make “Silly Sentences”.

Section Head, Madeeha Umar actively participated with the students through the week. She said that the importance of the English language could not be denied nor ignored and this week’s celebration had instilled a renewed sense of appreciation in the students of the magic that lies in languages.