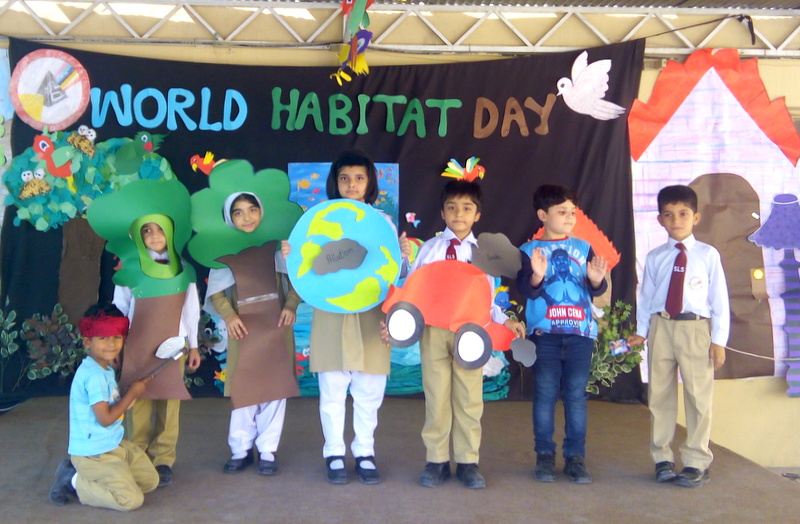 Students of SLS, Range Road Campus marked this day by holding a special assembly highlighting the importance of habitats and the need to preserve the habitats of various species. Several activities were also performed by the Montessori students in this regard. The school was decorated with colorful hangings of animals, birds and some endangered species. The corridors also looked colorful as they displayed different habitats of humans and animals both, such as trees, mountains, oceans and deserts.

All day long the Montessori students performed several interesting activities as the teachers explained the concept of “habitat” to them. The most favorite activity which was enjoyed by all the students included a matching game in which the Montessori students tried to match the habitat with its respective inhabitant through the help of flash cards.

A special morning assembly was also conducted which started off with an indirect introduction of the topic to the Montessori students. The school stage was divided into different sections displaying different habitats and their inhabitants. The students on the stage not only spoke about their habitats but also about some endangered species who are about to get extinct due to the destruction of their habitats by humans. The next performance was by a group of students dressed up in colorful costumes; some as animals and some as birds who performed on a song. Singing cheerfully they highlighted the importance of habitat preservation. The school ground filled with applause as everyone in the audience clapped and sang along with the performers.

The special assembly came to an end when short messages were delivered by the students regarding the theme of the day followed by a pep talk by head teacher, Irum Jamal who explained to the students about the importance of preservation of trees, water bodies and other natural resources which serve as habitats for different species as a necessity to maintain a balance in the ecosystem.