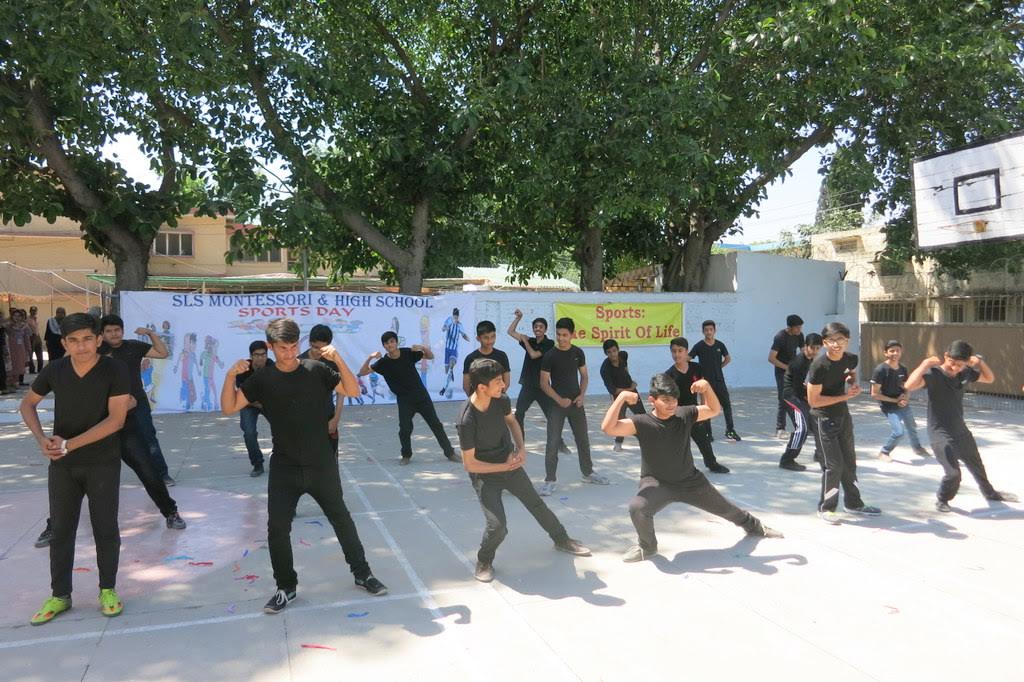 The event began the event with rhythmic gymnastics. Students performed a Ribbon act, a component of rhythmic gymnastics in which long colourful ribbons are twirled on long sticks. The ribbon performers were joined by frilly ringed aerobics performers who moved in perfect coordination to the rhythm of the beat. The upbeat opening acts were followed by a PT display and a martial arts demonstration performed to the soundtrack of Mortal Kombat. Students showed their warm up routine composed of stretches and Tai Chi. They showed their stick fighting skills, impressively twirling their wooden sticks in between moves. The use of the nunchaku, a traditional Okinawan martial arts weapon, was the second act. Taekwondo followed next with students showing how to defend basic attacks and how to turn them around in your favour. High kicks followed and the martial art performers saved their best act for the last – breaking three tiles stacked on one another. Their “Kiai” sound while breaking the tiles successfully brought a thunderous applause from the audience.

The next act was a synchronized aerobics dance with the use of colourful pom-poms. Moving to the sound of the music, the performers used their sitting and standing positions to make impressive synchronized waves in different directions. These ‘human waves’ were a treat to watch and the students practice showed in their flawless performance.

A girls tug-of-war and boys tug-of-war drew a lot of encouragement and cheers from the audience. A fun spoon race gave time to set the badminton courts where the final matches took place. A friendly football match comprising of just penalty strokes between the existing 9th grade and outgoing 10th grade ensued.

All dressed in black, two dozen boys showed the audience their gym routines, all done to very catchy music. Warm ups and stretches were given extreme importance and the correct body posture for lifting weights was emphasized.

The closing act was prepared to celebrate the World Day for Cultural Diversity celebrated the world over in the month of May. Close to a hundred students dressed in different provincial costumes performed provincial dances. Every province’s act was done keeping in mind every small detail of costume and dance. At the end, all the sports performers joined the regional dance performers and it was the most colourful and happy sight to behold.

Section Head, Farah Badar thanked the parents for their support and time. She said that while she understood how much pressure students are under once they are in secondary classes, sports is the most integral part of building character, and no one should grow up without having fun. She said the celebration of the International Day of Sport for Peace and Development brought both pivotal aspects of sports and fun together in one day.