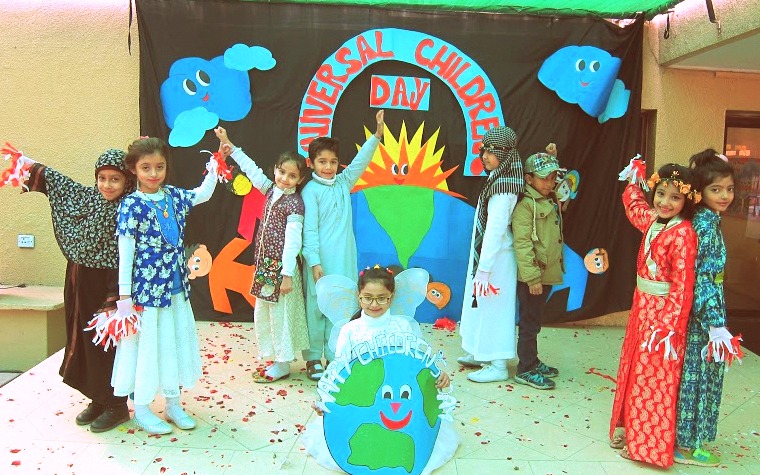 Students and teachers of the SLS, Lalazar Montessori Section held a special morning assembly in order to highlight the importance of this day and to make the wee ones a little more aware of their rights and duties. The assembly started with a small poem sung by a group of students on the theme of the term “Respect for All”. A young student gave a very admirable and effective speech on the why and when of the Universal Children’s Day celebration.

Skits were presented to highlight the rights of children, their right to an education, the right to good and healthy food and the right to be heard. Students came up on the stage one by one holding placards and slogans in order to make their fellow friends aware of their rights and just as importantly, their duties. The same concept was reinforced through a dance performance on a poem which had the same theme. The students clapped and cheered as a group of boys and girls performed on stage with glittery pompoms.

Students were made aware of living in a global village when they were told about the lives of children in different developed and underdeveloped countries and the kind of problems they face, if any, when it comes to their rights.

The final act was on the famous anthem “we shall overcome” with students dressed up in national dresses of different countries. Showing togetherness with the children of the world, the performance showed students standing tall with all children of the world who are suffering through violence and/or discrimination.

Principal, SLS Lalazar Montessori, Attiya Nadeem spoke to the students a little more about what they had just seen in their special assembly. She broke down the big concept of children’s rights in a way that the young minds could grasp. She appreciated everyone’s efforts and asked the students to give the assembly teacher and participants a big round of applause.