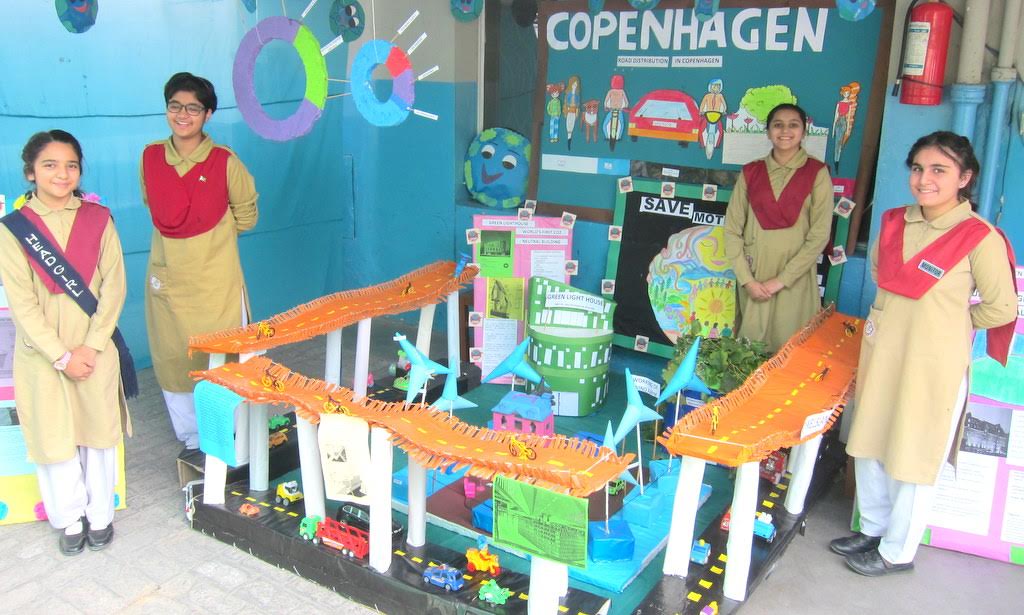 The United Nations designated October 31st as World Cities Day to encourage the international community to take interest in the effects of urbanisation. The students of the SLS, Tufail Road branch made and displayed projects reflecting the theme of sustainability in the urbanisation of cities.

The students divided themselves into groups and chose to study the top seven most sustainable cities in the world. The projects were displayed in the school ground and the parents and students who came to visit them were given information about each city. The stage of the school was separately decorated by the senior students and was transformed into a small windmill station with windmills that were operated by small batteries. The students not only made a laudable effort in creating the projects but they also collected useful data on how these top cities contributed in making themselves sustainable socially, economically and environmentally.

Special emphasis was put on the necessity of a clean environment to breathe for the sustenance of human life and the measures adopted the world over to obtain a carbon free environment was one of the focal points of these presentations. From Singapore to Stockholm and from Tokyo to London, students gave some very interesting facts about how these cities succeeded in providing a sustainable environment for humans and animals.

The famous landmarks of the cities gave them away immediately. Amsterdam’s huge tulip fields, the extensive overhead cycling track of Copenhagen and the Tyresta National Park of Stockholm were appreciated. Walking from one project to another showed well-researched flow chart diagrams, figure representation of water purification plants and models of green lighthouses and windmill stations.

Students also focused on the cities of Pakistan and the issues urbanisation is bringing socially, economically and environmentally. Principal, SLS, Tufail Road branch Samina Zeeshan appreciated the effort of her students and teachers and said that such projects were essential for students to be involved in for them to become well-rounded individuals.