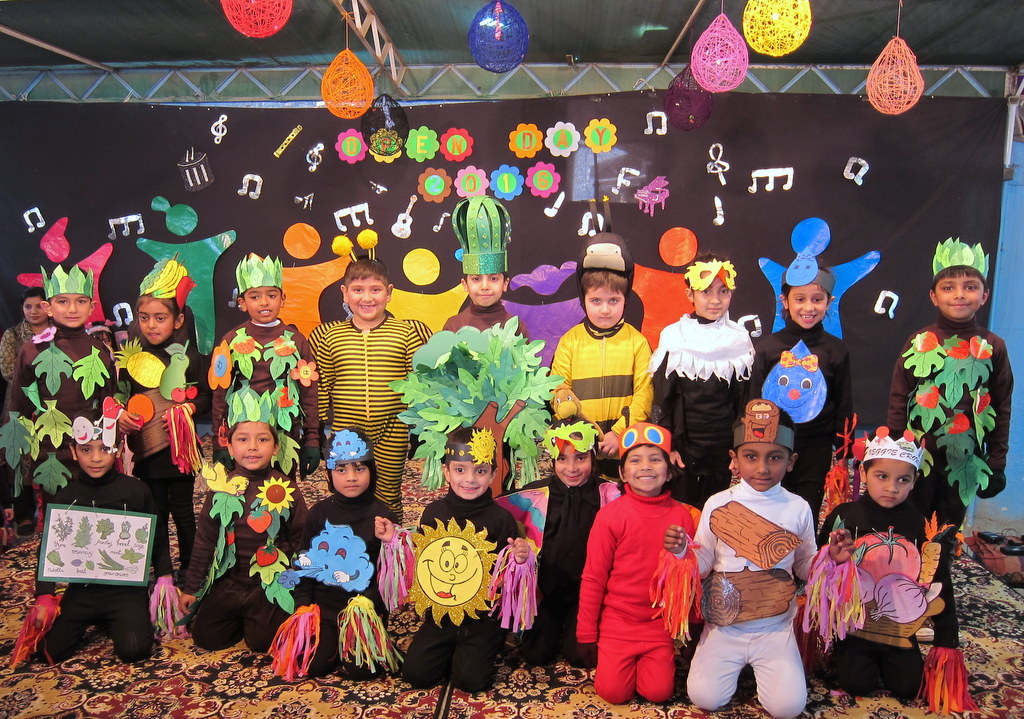 The programme began with a cheerful welcome address followed by an upbeat performance by the little ones. The rest of the performances that followed were based on the activities, nursery rhymes and values education lessons that are taught to the students in the school.

The Junior Montessori students performed on several poems as they came up on the stage dressed up as penguins, gummy bears, jokers, fruits and vegetables. The penguins marched, the bears clapped and the jokers laughed as they gave adorable and informative performances on their topics. Special efforts were put into the props for every performance and headgears, costumes and pompoms made very one feel full of colour and happy.

The first half of the programme ended with a short skit based on a story about the Importance of Trees by the Advanced Montessori
students. The skit demonstrated the importance of trees for our ecosystem and the dangers of humans cutting them.

Students performed on poems, songs and skits from their year’s learnings. Some were dressed up as shapes, others wore bows and ties while the rest wore colourful costumes.

Every school performance feels a little incomplete without a little bit of national pride and so a tableau was performed on a national song. The students represented the Armed Forces of Pakistan, some young ones were dressed up as famous sports people, others were doctors and lawyers.

Section Head, SLS, Khadim Hussain Road branch, Badra Beg thanked the students’ families for being such a good audience. She appreciated all the participants for their hard work and confidence and gave full credit to her team of teachers for such a successful event.

The programme ended with a short performance on sharing and caring and why is it important. The skit was based on a story of a fish who would share her shiny scales with the rest of the ocean fish.

The purpose of an open day is to invite students’ families to the school to see what they have learnt in the past year. The function was organised with weeks of preparation and it showed as the Montessori students did everything very independently. There was nearly full participation of all the branch students and from conduction to recitations, announcements and the welcome addresses, everything was done by the students themselves. In order to accommodate all the family members of the participants, the programme was divided into two halves.