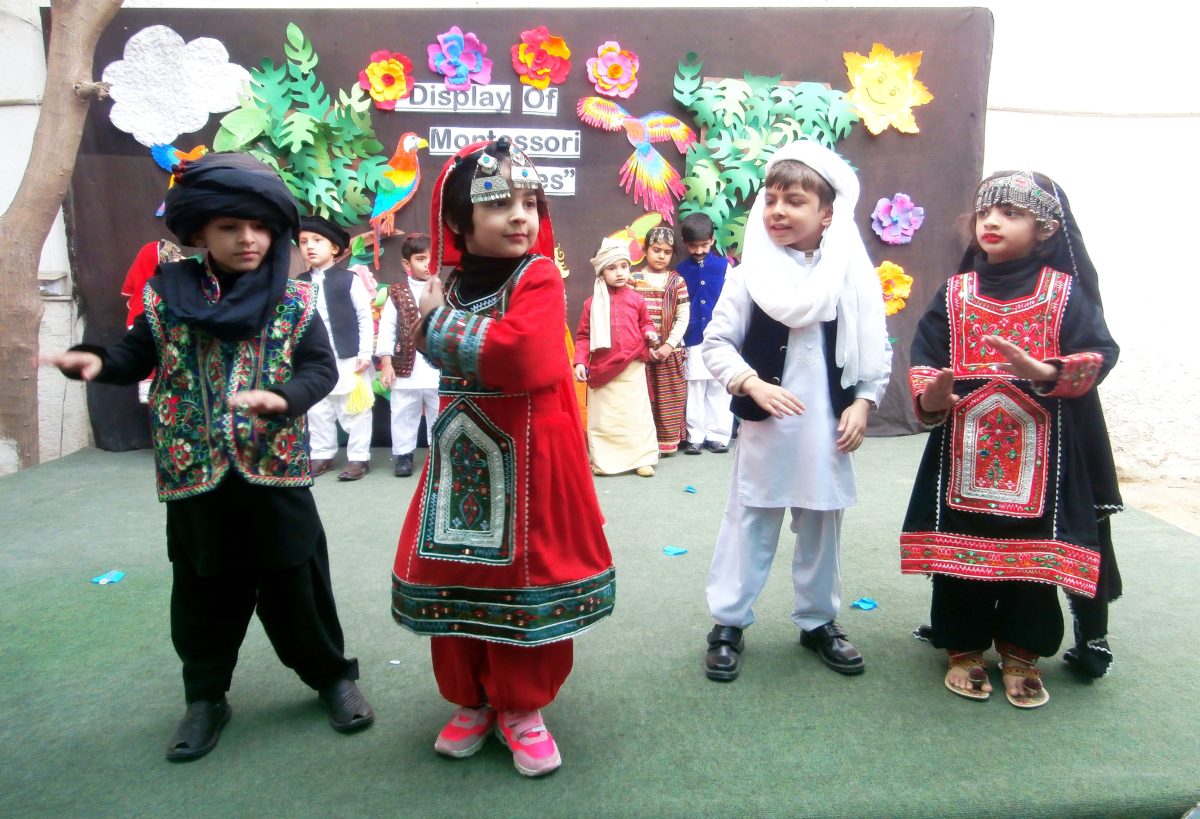 The building was decorated beautifully with black & red balloons & different related hangings which added to the beauty of the premises. The colorful buntings also reflected the two basic Montessori themes which the students had studied about, “Safety & Clothing.” The themes were displayed in the school ground where display corners were made and the students explained the respective themes and projects one by one.

All the respected parents were invited as guests who attended the wonderful show put up by the little tots of Junior, Senior & Advanced Montessori. The program started with the recitation of Holy Quran. A group of students dressed as Mickey and Minnie welcomed the guests with a splendid performance on an upbeat Mickey Mouse song. Following the welcome song were the mesmerizing performances of our students about the themes.

The theme ‘Clothing’ was displayed first. An impressive fashion walk was held in the beginning. Students looked amazing wearing cultural dresses & jewelry. Their cultural dance representing the provinces received a huge round of applause from the audience. They also portrayed the festive, wedding

and modern clothing of our country. The wonderful performances of the students had the audience under a spell. After the stage performances the guests moved towards the display areas. The first corner showed the types of clothing donned around the world. Students welcomed the guests wearing traditional attires of different countries like India, America, China and Afghanistan.

The second corner was decorated on the same theme and displayed different processes related to clothing like sewing, washing, ironing and dyeing. The students explained all the processes very confidently. Some students acted as tailors and some as laundrymen. Addressing the audience they explained them about their jobs. It was undoubtedly a wonderful sight to behold.

The performances about theme ‘Safety’ were no less. Students dressedas fairies, clowns, & traffic lights mesmerized the viewers with theirperformances and reminded them to be responsible and safe. The trafficpolice men also received admiration for their acting. Fire safety, roadsafety and water safety were displayed in first area where studentsdressed as fire fighters introduced themselves and explained about theirgadgets confidently. A small role play depicted the fire fighters rescuingpeople from a building on fire. They blew out fire using their creativelymade fire truck. Some students enlightened about the precautionarymeasures to stay safe while driving, crossing the road and swimming.Home safety tips were also shared in the other corner decorated askitchen and lounge.

The grand theme display was highly appreciated by Mrs. Asiya Talha, managing director SLS Schools and also by the parents. They admired the efforts of teachers and students on putting together a successful event. The guests also enjoyed food which was served at the stalls arranged inside the school premises and had fun with the children till late.